Stories about rivers and storms.

Vayu Naidu tells stories about rivers and storms, and the mischief of some and the magnitude of women – forgotten and remembered. Be prepared to be shocked, and surprised by tales that can be black and bright. 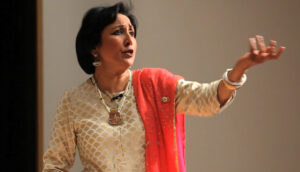 Dr Vayu Naidu was awarded the first PhD in Storytelling at the School of English, Leeds University exploring Indic oral traditions in contemporary western theatre and their resonances. Her transposition of classics, epics and folk tales with her methodology, gives the past a presence to contemporary audiences. Vayu Naidu Intercultural Storytelling Theatre Company, an RFO of Arts Council England toured Ramayana among other works across Britain, Scandinavia, Europe and India. She created and commissioned new work with Storytelling as spoken performance accompanied by Contemporary Music, Jazz and World Musicians, Contemporary and Classical Dance. She is a novelist of historical Fiction and her Sita’s Ascent (Penguin:2013) was nominated for the Commonwealth Book Award, and The Sari of Surya Vilas (Speaking Tiger -India, Affirmpress -Aus/NZ: 2017) was ABC Book of the Week for India’s 70th Anniversary of India’s Independence. She is currently a Royal Literary Fund Fellow at RHUL, History completing her forthcoming novel set in seventeenth century England and India.

A violinist and collaborator based in London.  She enjoys a diverse career combining orchestral, chamber and solo performances with improvisatory and multi-disciplinary projects.  Specialising in contemporary and world musics, recent performances include projects with Nigel Kennedy, Jean-Luc Ponty, L. Subramaniam and with Sam Lee at WOMAD festival in Australia and New Zealand.  Alice’s collaborative work is genre-spanning and draws on her experiences studying South Indian violin techniques.

Please be aware that this event will be filmed.

Also in this series

As a charity, Tara Theatre relies on the generosity of our supporters. With your help, we will continue to promote social change and inclusion, making work that embodies our vision of a more equal and equitable world.

Your donation, however big or small, will make a difference. Thank you.

CHOOSE AN AMOUNT TO GIVE