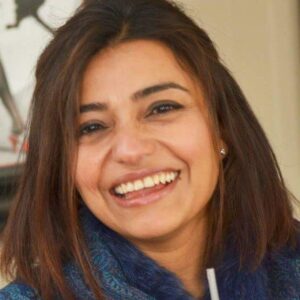 Mehtab began singing at age 4 under the guidance of her father, late Raghubir Malhotra, followed by training from Ustaad’s of the Delhi Gharana including Ustaad Iqbal Ahmed Khan. Ghazal is her passion and her first stage performance was at age 7, followed by over 600 concerts in India and the U.K. Her fondness for the romantic and socially-charged poetry of Faiz, Mir, Ghalib, Zauq is evident from her repertoire.

In 1998 she visited Lahore to record an album with the Late Nusrat Fateh Ali Khan, named Samandar mein Samandar.

Music unites and dissolves differences is Mehtab’s great belief. She practices as Barrister from Lincoln’s Inn, London and is a Senior Lecturer in Law.

Please be aware that this event will be filmed.

Also in this series

As a charity, Tara Theatre relies on the generosity of our supporters. With your help, we will continue to promote social change and inclusion, making work that embodies our vision of a more equal and equitable world.

Your donation, however big or small, will make a difference. Thank you.

CHOOSE AN AMOUNT TO GIVE